I am just bursting at the seams with anticipation for the coming growing season. Progress is happening, slowly but surely, on a number of fronts. Also some of my plans are starting to crystallize as I purchase and prepare to purchase seeds and plants.

The cherry trees are looking great, with plenty of buds on each. The Black Tartarian tree is looking healthier than the Stella, with more growth through last season and more buds. The Stella looked like some of its buds last year had been stripped off at some point, which meant less growth through the season and fewer buds over the winter. I didn’t fertilize last year, on recommendation from several sources, but I’m looking into some kind of fertilization this year. Fertilization may be indicated this year because the trees are more established and because there was relatively little growth of twigs and shoots last year. A few sources online have suggested I put down something to feed the trees before the buds open, I am still trying to figure out what and how much.

We’ve had a few warm days here and there in March, and I’m really hoping that my Cherry buds don’t start trying to open prematurely.

I took a pH test of the soil in the blueberry pots, and the result was far too high. The soil was nearly neutral (7.0) when Blueberries seem to prefer soil which is acidic (5.5 or thereabouts). Blueberries need Iron for health and production of large crops of berries, but the roots can’t absorb and transport the iron unless there’s some acidity around to help. Some sources suggest using Iron Sulfate as a fertilizer, to both add extra iron to the soil AND produce sulfer-related acids to decrease the pH. I couldn’t find that, so I just picked up a bag of elemental sulfur soil acidifer. I added something like a cup and a half per pot, mixed in with the top level of soil (being careful not to disturb the shallow roots). The sulfur requires some water and some time to turn into acids and permeate the soil, so I’ll test the pH again later and see how things are progressing.

The garlic survived the winter with ease, and now is starting to grow a little bit when the days are warmish. Even the Leningrad garlic, which probably the slowest to sprout in November and had me worried that it was dead on arrival, is poking up with some deep green leaves. The German White garlic, which had the largest cloves but also the fewest, has the biggest leaves and is looking like it’s ready to explode when the weather gets warm. 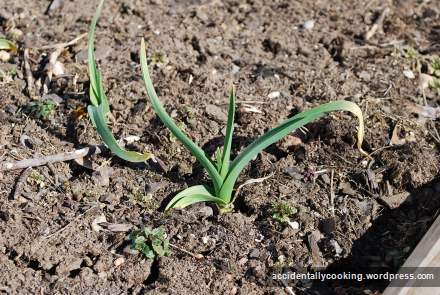 Some Daffodils and Tulips are starting to sprout in one of the flower beds. Some leaves had blown into the bed during a recent storm, so when I raked the leaves out I saw the wonderful little green shoots. It doesn’t look like all the bulbs we planted survived the winter, but that just means we have some space to put more flowers this year. We can’t (or, shouldn’t) eat these flowers, but I mention them here anyway because I’m super-excited about anything that appears to be alive.

I have some Rosemary and Mint in pots that I kept over the winter. I was hoping both of them would come back but I’m not seeing any signs of life  yet. I’m making sure the pots are getting as much light as we can get on these short, dreary winter days. I’m also giving them a little water when the days warm up. If they do come through, I may try to find a permanent in-ground home for them this year.

I tried to identify the large maple tree in my front yard, and I think it’s a Black Maple. At least, I think so. Black Maple is one of the two species that can be tapped for maple syrup, although the time to do so has just barely passed. When some leaves come out I’m going to try to confirm my identification of the tree and maybe next winter I’ll try to tap it for some syrup.

I'm a software engineer from Philadelphia PA. Sometimes I like to go out to my garden, or step into my kitchen and make a really big mess of things.