I have a rule: When cherries get down to 1.99$ per pound or less I pounce on them like a lion who….pounces….on things. Whatever. I’ll work on the metaphor later. Don’t judge me.

Last year I couldn’t even find sweet cherries in the grocery store for any price, but this year they came down to 1.99$ for a brief, glorious moment. I ended up with three bags. Three bags, and no immediate plans for what to do with them. I sat down for some serious brainstorming (and, truth be told, browsing funny cat pictures on the internet. I have an attention deficit thing).

I decided to try out a recipe for pickled cherries I got from my pickling book, but that was only a pint. I needed something to do with the rest. (The pickled cherries take about a month to brine, so I’ll post that recipe with review when I have a chance to taste them).

I have been keeping a recipe for Chai Cherry Butter in the back of my head since I first saw it last year. I didn’t have the spices needed, but I liked the general idea of making a cherry butter. So, that’s what I made (next year, maybe, I’ll try the Chai version).

This recipe doesn’t include any measurements, because they really aren’t necessary. A simple cherry butter has only a single ingredient, and you just cook it down until it’s the texture you want. Things get only a little bit more complicated if you want to preserve the results in a sealed jar, but not by much.

Put the cherries in a crock pot, along with some sugar (about a cup, to taste) to help release the juices. I added the cinnamon here to really incorporate the flavor, but you can add it later too. Set the temperature to high and just cook the heck out of them for a long time. At least a few hours. Blend the cooked cherries with an immersion blender or, working in batches, with a regular blender. 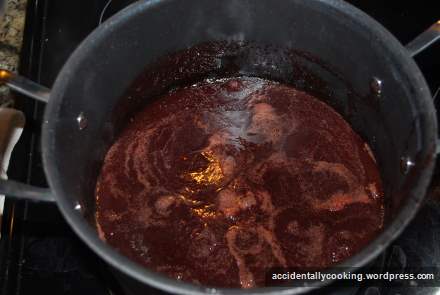 Continue cooking the mush down until it has your preferred fruit butter consistency. Stir in the vanilla and amaretto. Cook a bit longer to let some of the alcohol boil off.

Fill warm, sterilized jars with the butter. Add lids and bands, then process in a boiling water bath for 15 minutes.

The resulting butter is fantastically good. It has some of the same character as an apple butter or a peach butter, but with a strong cherry flavor that has to be tasted to be believed. The cinnamon was added very early in the process so its flavors were subtle and mellow. I wasn’t trying to make a “Vanilla Cherry Butter”, I only wanted to add a dash of vanilla to help bring out the cherry flavor. Dana says she can taste the vanilla clearly, but I feel like I hit it right on the mark. The amaretto, like the vanilla, was not intended to change the flavor in a major way. Instead I wanted it to just add some background complexity, which it did.

I never cook my fruit butters down as far as some people on the internet do. The consistency is good and thick but still spreadable. The flavor is great. Just, great. I don’t know why I’ve never made this before but I will most certainly be making it again.

I'm a software engineer from Philadelphia PA. Sometimes I like to go out to my garden, or step into my kitchen and make a really big mess of things.